This plant was long gone before my time.  It was located roughly where the Riverview Community is now.  There’s an excellent history of this company here and a photo of a post card that I think is not as old as this one: 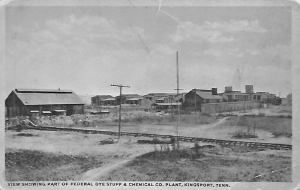 This is a Kingsport Drug Store issue, printed by Curt Teich Company in Chicago (as best as I can tell, from the dating system for CT, this is an AD (for Doubletone) card from around 1917).  Kingsport Brick became General Shale.  This plant is no longer operational and has been seriously vandalized.  Those round kilns have been gone for years.
In the late 50s, from our apartment in downtown Kingsport, I noticed a fire at this plant.  I grabbed by Argus camera and hurried over there.  As I was taking a picture of the building on fire, a man walked up to me and introduced himself as Ellis Binkley, editor of the Kingsport Times-News.  “Come see me, boy,” he said, “when you graduate and I’ll have you a job as a photographer.”  I said I would.
Turns out, after I got out of service, I hired on at the Times-News, then on Market Street, as a night shift photographer.  Mr. Binkley, by that time, was mostly retired and I don’t think I ever reminded him of the encounter at the brick plant. 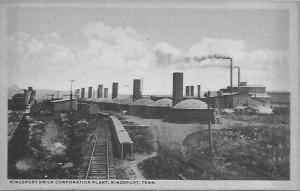 I didn’t even know this stupid old bridge was still in place.  It’s been out of use for decades. This bridge connected the Springdale Community, South Eastman Road, to Long Island.  Eastman Road then went across the Island to another, long gone, bridge that went right into Eastman.  I once lived in Springdale, but we didn’t have a car then, so I wasn’t at all familiar with these bridges.  If we caught a bus to town, we went via Wilcox Drive. My buddy, though, who lived in Edgewood, vividly remembers his school bus easing by oncoming traffic on this bridge. It’s only about 17′ wide (and about 220′ long).  This is looking toward Springdale.  It’s still pretty sturdy, but the piers are starting to crumble.  There was no date plate on either section.

Here’s an aerial shot of Eastman from the late 40s or so.  It shows the bridge I mentioned above and you can also see a little bit of Edgewood Village in the upper left quadrant. 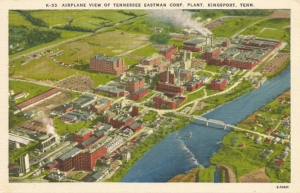