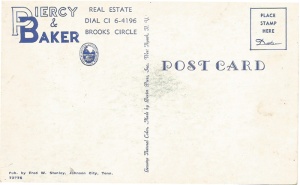 Piercy – Baker opened this office in 1953.  It was at 1701 Ft. Henry Drive at Brooks Circle.
Behind it are, as you may have noticed, Cherokee Boat Company and Motor Sales Company of Kingsport, both presided over by Myrtle C. King, with Clifford V. Bryant Sec Treas.  John L. Mitchell was in charge of boats, motors and fishing equipment at Cherokee, while Mrs. Anna A. Hester was asst. sec trucks at Motor Sales.  That building is listed as being on Eastman Road. The Pot O’ Gold, then just a delicatessen, presided over by James A. Brockman, was at 1713 Ft. Henry Drive.
The postcard picture was taken by Fred W. Stanley of Johnson City, printed by our old friends Dexter Press on West Nayak NY.  Inventory number 73775.
Interestingly, it appears that Kingsport was recovering from a snow storm when this picture was taken. Note the wet asphalt and, to the left, what appears to be leftover snow.