Last Sunday, as I drove back into town, I saw the rivers were running pretty full, so I parked by the bridge, got my camera, walked out and got this shot of the Confluence, where the North Fork (flowing under where I’m standing) and the South Fork of the Holston Rivers converge.  The diversion wall is overtopped (I’ve heard that part of that diversion wall is composed of concrete from the bridge that collapsed in the last century).  The diversion was necessary because the North Fork flows faster than the lazy old South Fork.  In times of deluges, the North Fork would prevent normal flow of the SF, which would back up and annoy the residents along the river. 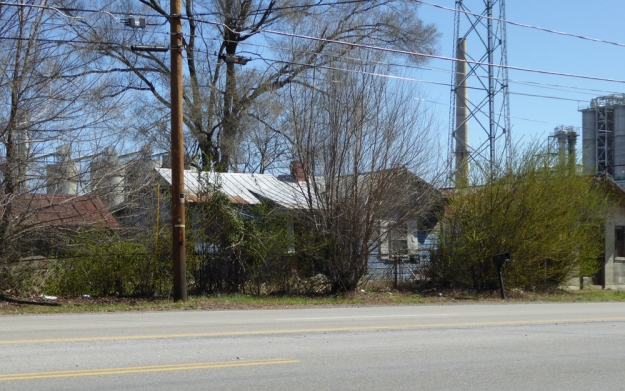 Driving down Jared Drive a couple of weeks ago, I saw this light blue house sitting quietly (and probably nearly invisible in summer) amongst the mass of Eastman.  There used to be a thriving and notorious community on Long Island.  I wonder if this is the last remnant of that neighborhood.

My dad was a taxi driver for a while.  He never liked having to go to Long Island at night.  He did, though, and lived into his seventies with nary a bullet hole visible. 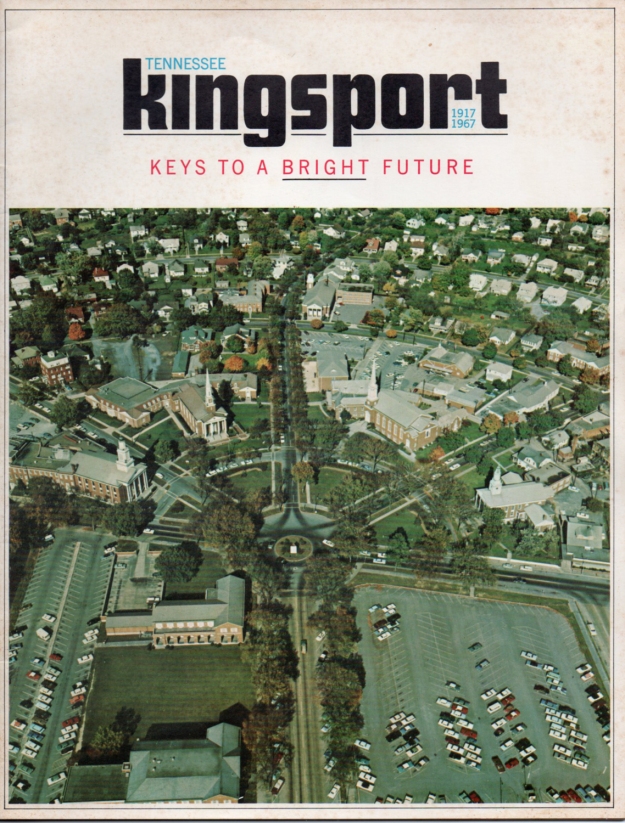 I stumbled across this recently in one of the old stuff malls.  This is the 50th anniversary booklet (standard size: 8.5 x 11″)(I’ve reduced it to fit on this page – snicker) issued by the ever mindful Chamber of Commerce.  Eight pages, excluding front and back cover.  It’s quite informative and well written.  Population then was about 33,000.  The mayor was Hugh Rule. C.K. Marsh apparently was the City Manager.

Notice how a) the car tire tracks are really black and 2) it apparently was normal to go directly from Watauga to Sullivan without slamming into the circle.

This was taken in March, 2004.  The foundry, begun in 1927, had been unable to struggle through past 2003.  Later, after all the buildings had been demolished, I used to walk around and marvel at the massive concrete foundations for the heavy machinery used in the making of iron castings.  Foundries have a particular odor, mostly of metal and furnaces.  You could just get the faintest whiff of it.  Look in Dick Alvey’s Wings over Kingsport for an aerial view of this operation in the late 30s and, again, in the 60s.

I was going to link to the book on amazon.com, but it’s currently out of print.  You can occasionally run across it at local antique stores.