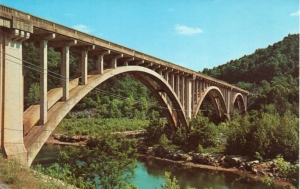 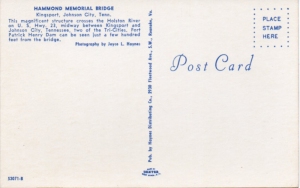 Calvin Sneed’s posted this 1929 bridge here with all the appropriate descriptions (Calvin knows more about bridges than anyone else I know – given that I don’t actually know a lot of people who have any interest in bridges, but, Calvin, he’s a bridge boffin straight up.  At the time this postcard picture was taken (1961 or 62)*, the bridge was two-way.  When I got out of the service and got a job, I bought a 1966 Volkswagen.  Even with that car, this bridge was a white-knuckler if a truck was coming the opposite way when it was snowing, in the dark.
Anyway, I think this bridge is utilitarian, rather than “magnificent”.  This view is looking east. In  1969, they built the wider steel bridge, just to this side of this one. Whew.

Incidentally, this bridge replaced a 1900 Pactolus Ferry bridge, which crossed the Holston River near (my correction to earlier prepositions)  where the Ft. Patrick Henry Dam is now.  Before the bridge, there actually was a ferry there.

*Haynes Distributing Company in Roanoke had their photographer/agent Joyce L. Haynes in this area in 1961 and 1961.  Shooting Kodachrome, probably.  This type of postcard is called a “chrome”.