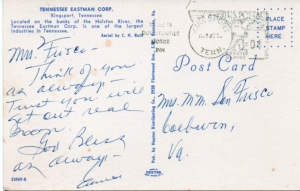 Another Haynes Distributing postcard, printed by Dexter, West Nyack NY.  On December 4, 1967, that bridge, already 50 years old, collapsed when the driver of a 13.5 ton truck drove onto the 5-ton limit bridge.  Someone had helpfully removed the load limit sign on the Long Island side of the bridge.  The driver, though quite chilled after the 30-odd foot drop into the South Fork of the Holston River, wasn’t hurt.Afterwards, Eastman firmly opposed rebuilding the bridge, citing things like height, depth, width, water, air, arm-waving and other important considerations.

Since this card was mailed at the Downtowner Motor Inn, which wasn’t completed until 1962, the slightly non-existant postmark is probably 1965.

And we all hope Mrs. Frisco got out real soon.

I’m posting this not because it’s a fine, 1920s postcard, but because it was published by T. J. Stephenson and I finally know pretty much who this was.

T. J. Stephenson was born in 1884 (thereabouts) in Virginia.  He was, however, thoroughly Kingsport as a property owner (bought into the Hillcrest property when Federal Dyestuff company went belly up at the end of WWI), merchant (Baylor-Stephenson Furniture Store), an agent (Kingsport Mercantile Agency), member of the Board of Elections, a churchgoer (Broad Street Methodist), a city alderman, a supporter of the WCTU, and more.  He seems to have been a pretty straight up guy.  His first wife, Maxine, died somewhere in the 1920s.  He was listed as “widowed” in the 1930 census.  But he was remarried in the next census, to Pauline.  T. J., jr. was born in 1908, but died after a “three week illness” in a Knoxville Hospital in 1936.  He was working for Tennessee Eastman and, apparently, was well liked.  There was another son and a daughter who went to school to learn the comptometer, an early mechanical computer.

Since T. J. Stephenson was interested in Kingsport, my guess is that he is the one who commissioned Tichnor Brothers (out of Cambridge MA) to come take some black-and-white views of the growing city and have postcards printed.  The cards were tinted prior to printing according to notes taken by the agent at the time the photos were taken.

I don’t know how many cards are in this series.  I have 18 and I know of at least one more.