This used to be on Memorial Boulevard, roughly between 93 and Harbor Chapel Road, on the right as you’re ascending the hill.  Later, it was Abe’s Pies (the pies were pretty good).  I’ve heard that John Barker had a speaker in it connected to a microphone so he could surprise tourists (this was, after all, originally a tourist attraction).  It’s now on Stone Drive (Robert E. Lee Highway) at a well-regarded barbecue place.  It’s been refurbed since I drew this.  I’ve also heard that, at one time, a fun-loving family of wasps built a nest under the loincloth, resulting in some startled expressions from people who happened to glance up ‘twixt the faux Native American’s legs. 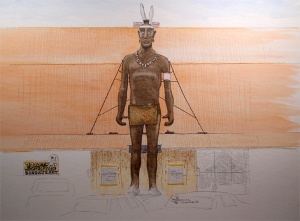 2 thoughts on “The Indian”