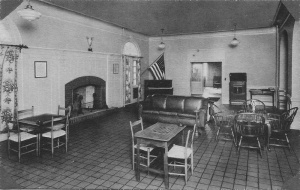 This rather well-produced post card, from the 1940s, appears to show a recreation room at the Kingsport Inn.  There are a doughty fireplace,  a radio set, a piano, game boards and chairs, an American flag and ashtrays everywhere. You can just see into the next room through the door.  The door to that room is open and there looks to be a window beyond the door.
I had dinner once at the Inn.  I was competing in the Optimist Oratorical Contest.  I didn’t win, but I had a good meal…roast beef, I think, and mashed potatoes.  That I remember, but as to what vegetable or dessert was served or what the interior of the Inn actually looked like, I have no clue.
Five or six years ago, while working on some project or another, I ran into the man who had been our coach for the contest.  He vaguely remembered me.  “I didn’t think you’d come to be anything,” he remarked.  I was a bit stung at first, then I thought, “Well, up yours, dude.  I did just fine, thank you.”
This card had been mounted in a scrap book, held in place by paper corners.  When the card was removed, some of the paper remained on the corners of the card.
On the back upper left is: KINGSPORT INN Kingsport, Tennessee.
It was printed by the Albertype Company in Brooklyn.