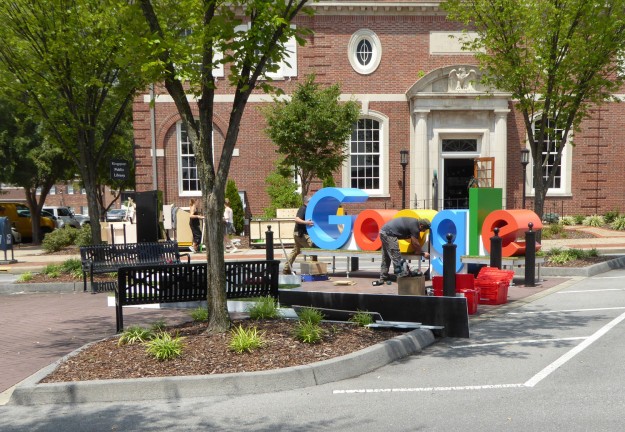 I saw this going in on Sunday afternoon and, for a moment, I felt a faint quiver of excitement, then I remembered that the City was having a Google enterprise workshop on Monday (8/13/18).  That’s what the people in the background are doing: loading in chairs for the event.  Anyway, it was kind of different, though.

A sudden re-emergence of an old sign.  Kyle Huddle built this building in 1947, moving from his previous location on Broad Street (he started out on Shelby Street).  I was never introduced to him, but I knew him by sight.  He was short and ageless.

He and Clifford Sanders, a lawyer, started Tennessee Cable Television Corporation, said to be the second-oldest cable TV company in the United States, in 1951.

According to Brianne Wright, Kingsport City Archivist, he had an 87-year stay on this good Earth, from 1904 to 1991.

Side note: the parking lot on which I was standing when I took this picture was, when I was a kid, an empty foundation filled with water.  Mom and I would go by it on our way to the library, then at the corner of Shelby and Center.  There was a fence, but you could look in.  I always wondered if there were fish down there. 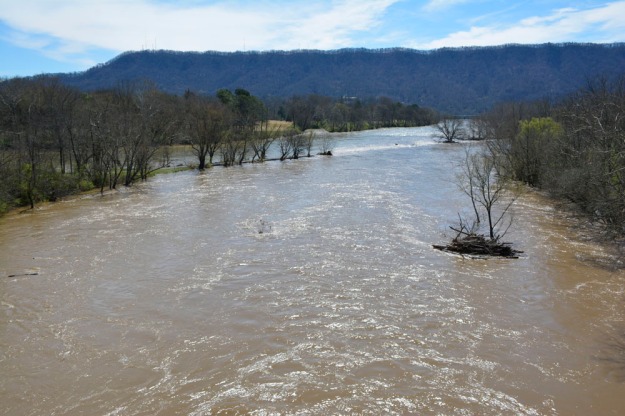 Last Sunday, as I drove back into town, I saw the rivers were running pretty full, so I parked by the bridge, got my camera, walked out and got this shot of the Confluence, where the North Fork (flowing under where I’m standing) and the South Fork of the Holston Rivers converge.  The diversion wall is overtopped (I’ve heard that part of that diversion wall is composed of concrete from the bridge that collapsed in the last century).  The diversion was necessary because the North Fork flows faster than the lazy old South Fork.  In times of deluges, the North Fork would prevent normal flow of the SF, which would back up and annoy the residents along the river.

Driving down Jared Drive a couple of weeks ago, I saw this light blue house sitting quietly (and probably nearly invisible in summer) amongst the mass of Eastman.  There used to be a thriving and notorious community on Long Island.  I wonder if this is the last remnant of that neighborhood.

My dad was a taxi driver for a while.  He never liked having to go to Long Island at night.  He did, though, and lived into his seventies with nary a bullet hole visible.

This grubby little number has been around for a while.  Roberts & Johnson Lumber Company, located next to Oakwood on West Sullivan Street, burned in the late 70s.  For some reason, nothing was ever done with the plot of land at 451 West Sullivan.  Except for now, since the land will be subsumed by the development taking place in that area.  Alas, if this were yours and you just had to measure something, you’d be out of luck…it’s rusted closed. 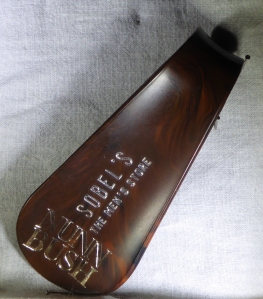 I thank Carl Swann for this item.  Its age is indeterminate.  The “Sobel’s The Men’s Store” appears to have been hot stamped onto the shoehorn. “Shoehorn” is an old word, dating back to the late Middle Ages, as a “schoying horne” (it’s all in Wikipedia)…a “horn” in the sense of a tool to help put on a shoe.  There were various sizes (long ones for boots); this one is 3.5″ long.

Nunn Bush shoes are still distributed by Weyco in Wisconsin…Weyco is essentially a Florsheim operation since 1964.  Weyco claims a founding date of 1892.  Nunn Bush was established by Henry LIghtfoot Nunn in 1912.  I don’t know what happened to Bush.  I can’t find a reference.  Really, his middle name was “Lightfoot”?  Too punny.

When I was in the Air Force, we had the opportunity to purchase Florsheim dress shoes.  For whatever reason, most all of us had gone back to our Government-issue shoes in six months or so.  The Florsheims just didn’t hold up well (this was back in the mid-60s).

This is the back of the old Coca-Cola bottling plant on West Sullivan.  The trucks backed up this ramp to be loaded for deliveries.  Backing up the ramp must have been fun, especially before dawn.  Or raining.  Or in snow.

The windows in front of the building allowed you to watch the process as the bottles whizzed by.  Hot stuff in the ’50s.

This was part of the Tennessee Valley Dragway (1965 – 1969), looking east to Cleek Road.  Had the strip been completed, it would have spanned the 3/4-mile or so between Cleek Road and an area in front of the present Traders Village. Note: the access to this area is gated.  It’s on private land.

Interesting history…read about it here.