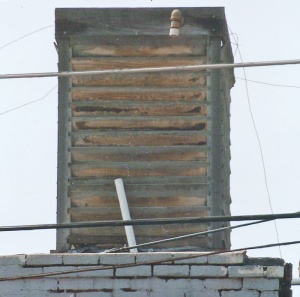 Back before the now ubiquitous air conditioning units became common on business rooftops, these structures dominated.  This unit, which used to be on top of the Variety Printing building (formerly one of two downtown locations of Mack Ray Cafeteria…the other was on Commerce Street in the old Harry Mills Motors, across from WKPT), cooled the inside air by evaporation. Inside this louvered, wooden structure was a coiled pipe through which air was pumped.  Water was sprayed over the coil, thus cooling the air by evaporation.  Something akin to the effect you’d get from a wet t-shirt, if the only reason you were wearing a wet t-shirt was to cool off. And if you had a breeze of some sort.
At any rate, I would often get lightly sprinkled with water walking down the alley, if the breeze (mentioned before) was blowing the right direction.
Why was I in the alley?  Going around to Wallace News, of course.
Note the (ha!) stabilizing wires.  Such strength.